In evidence to the Justice Select Committee on progress made on the implementation of the recommendations of his review into the treatment of and outcomes for BAME people in the criminal justice system, David Lammy MP said that the UK was sitting at the ‘extreme end of the developed world in relation to disproportionately’. We agree.

Our State of Children’s Rights in England report, published last month, highlights the urgent need to reform how we respond to children in conflict with the law and paints a bleak picture of the treatment of BAME children throughout the youth justice system.

Increasing use of police force on children

Our report also revealed new and alarming statistics on the use of force on children by police. We know from our work that this can cause serious physical and mental harm. In 2017, Tasers were used on children at least 871 times and this figure was already 839 just nine months into 2018. Fifty-one per cent of children who had a Taser used on them were from a BAME background. The statistics for Taser use by the Metropolitan Police Service (MPS) were even more shocking with 68 per cent of Taser incidents involving BAME children. 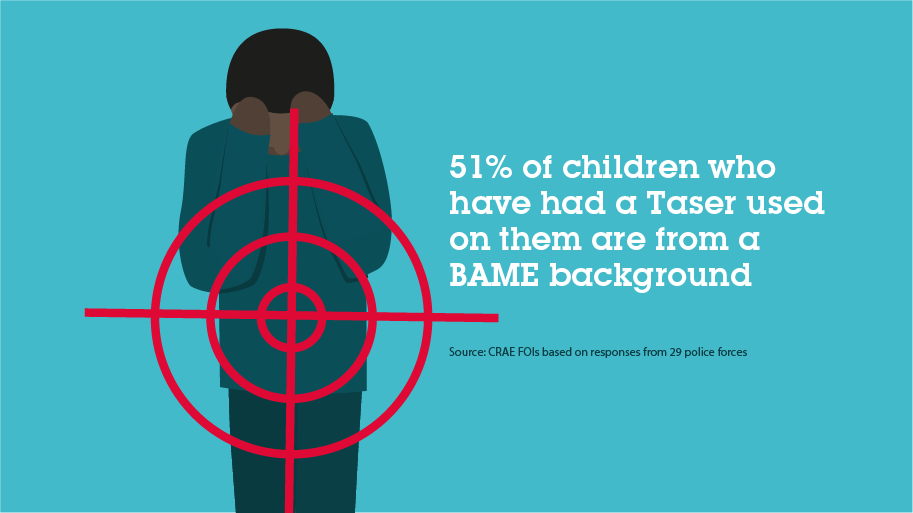 Spit-hoods - bags made of mesh-like material which are placed over the head - were used at least 47 times on children in 2017 and 114 times in the first nine months of 2018. Across the whole period 34 per cent of spit-hood uses nationally were on BAME children and a shocking 72 per cent of uses by the MPS. This disproportionate use on BAME children is likely to increase given the recent announcement that MPS officers will now be allowed to use spit-hoods on the streets of London.

The Gangs Matrix is another controversial element of policing that predominately affects young black boys. Recent research has found it to be a racially discriminatory system, which stigmatises children and is ‘unfit for purpose’. Of those on the matrix, 87 per cent were from a BAME background and 78 per cent were black.

State of Children’s Rights also raises serious concern about Home Office plans to introduce Knife Crime Prevention Orders (KCPOs) in a reactive attempt to address the increase in knife crime. We know from our work with children and young people that they frequently carry knives because they are scared or because they are being exploited by criminal gangs. There is no evidence that these Orders, which can be given to children as young as 12, will be effective. The inevitable breach of a KCPO can result in a custodial sentence and is squarely at odds with the public health approach to tackling serious youth violence which the government has previously espoused. KCPOs will do little to address the underlying causes of knife crime and are likely to further push BAME children into the youth justice system.

Top of the government’s agenda?

Due to their seriousness and complexity, the issues we raise are not easily solved, but it is clear from our report that disproportionality should be at the top of the agenda for government and all those working in the youth justice system.

It is crucial that the government urgently act to implement the recommendations of the Lammy Review to reduce the high levels of BAME children in the youth justice system and commission Her Majesty’s Inspectorate of Constabulary and Fire and Rescue Services to carry out a thematic review of the police treatment of BAME children.  Alongside this, the response to children in conflict with the law must also shift to a child rights, individualistic and welfare-based approach which focuses on preventative work and identification of vulnerable children at risk rather than use of force and criminalisation.

Laura Cooper is Youth Justice Lawyer and Senior Policy and Public Affairs Advisor Children and Policing at Just for Kids Law. This post was originally published as a guest blog for the Centre for Crime and Justice Studies.