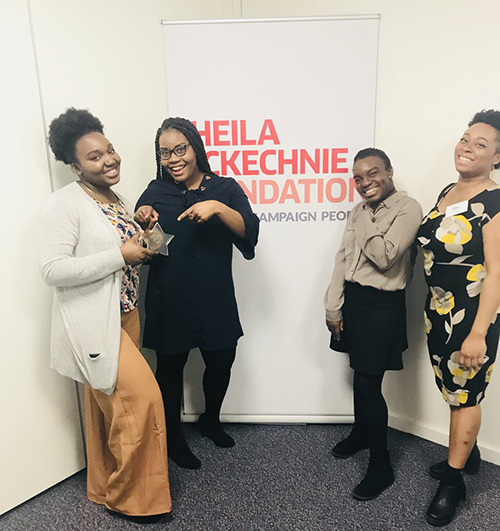 Receiving the Amplifying Voices Award shows us that we are doing something right; it’s amazing to be recognised amongst other campaigners.

The campaign's founder and co-lead, Chrisann Jarrett, said: "Let Us Learn has provided a platform for many young migrants to voice their opinion, emotions and tactics for change. Receiving the Amplifying Voices Award shows us that we are doing something right; it’s amazing to be recognised amongst other campaigners. We will continue to do the work we do, to ensure that there is a strong counter narrative to the voices of hate and discrimination and to ensure that all migrants can fully contribute to British society."

Chrisann collected the award alongside fellow Let us Leanr campaigners. Zeno Akaka said: "It’s an honour to be recognised by our peers and we aim to continue to live up to this award and more."

Ijeoma Moore said: "Last night left me feeling ecstatic and excited about the future of LET US LEARN! I am immensely proud to be a part of such a powerful campaign group."

Lizzie Etti said: "I felt proud. For people to hear about the work that we do and be so inspired by us is really fulfilling. We won’t stop here!"

Let Us Learn seeks to secure equal access to higher education for young migrants. Hosted by the charity Just for Kids Law, this youth-led initiative works with over 900 young people between the ages of 16 and 24, from over 70 different countries who have made the UK their home.