The right to education is crucial for children and young people’s development, happiness, and future outcomes but for some children this right is not being realised.  The use of both permanent and fixed-term school exclusions has been and still is increasing. What is deeply worrying is that certain groups of children and young people are disproportionately excluded – Gypsy, Roma and Traveller children (GRT), Black Caribbean pupils, children with SEND, children eligible for Free School Meals (FSMs), looked after children, and boys. For example, in 2019, GRT and Black Caribbean children are excluded at between double to four times the national rate. Children with SEND are excluded at six times the national rate.

It's also crucial to highlight that many children in the youth justice system have been excluded from school at some point. Evidence from casework at Just for Kids Law shows that a significant proportion of these have been excluded because they have been the victims of child criminal exploitation (CCE) and groomed into criminal activity, often into “county-lines” drug trafficking, which involves children and young people being used to transport drugs into different parts of the country. Listen to some of our campaigners discuss the link between school exclusion and child exploitation in this podcast from The Children's Society.

In addition to legal representation and advocacy at JfKL, the School Exclusion Campaign offers young people with lived experience of school exclusion in London a supported opportunity to elevate their voice and work in partnership with JfKL to create a steering group and campaign that will influence positive change and wider reform for all children and young people. With the encouragement of the Youth Engagement & Campaigns Organiser, the young people on the campaign form the steering group and are responsible for and lead the creation and direction of the School Exclusion Campaign. The young people are recognised and regarded as experts by experience and as activists for their involvement.

Check out this panel discussion that a group of our campaigners took part in, covering disproportionality; schools making decisions for their own interests; fear in young people on many fronts including violence, police and failure; the importance of parents understanding how exclusion works, that they have a right to appeal, and of their staying in touch with their child's education all the way through secondary school.

If you're a young person (aged 14-24) with lived experience of school exclusion who wants to get involved in the campaign, please fill out this short referral form and send it to our Youth Engagement & Campaigns Organiser, Michaela Rafferty, at michaelarafferty@justforkidslaw.org.

Meet some of our School Exclusions Campaigners: 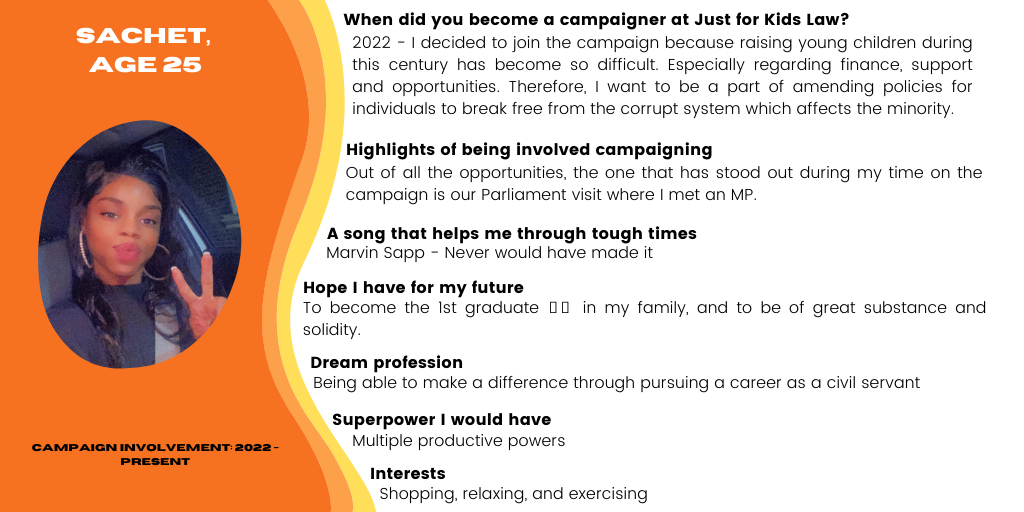 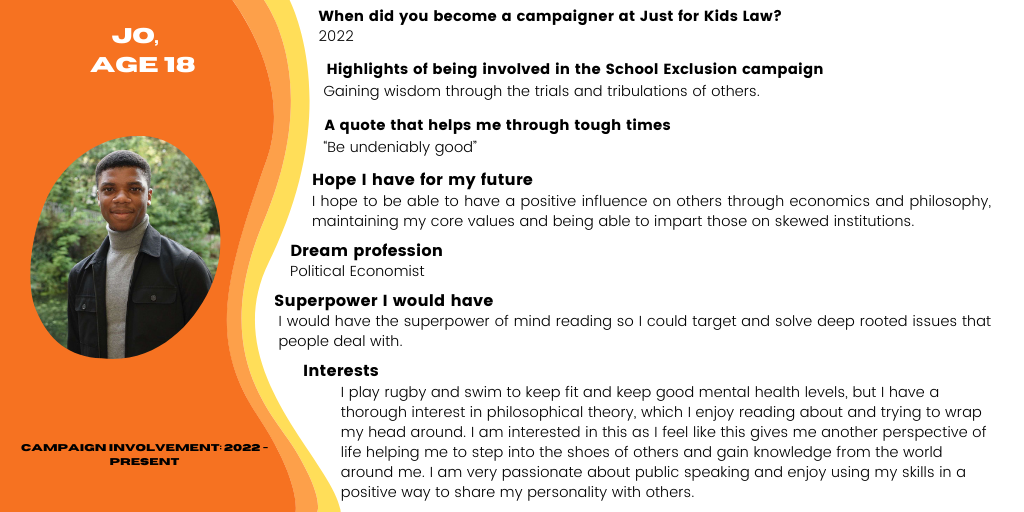 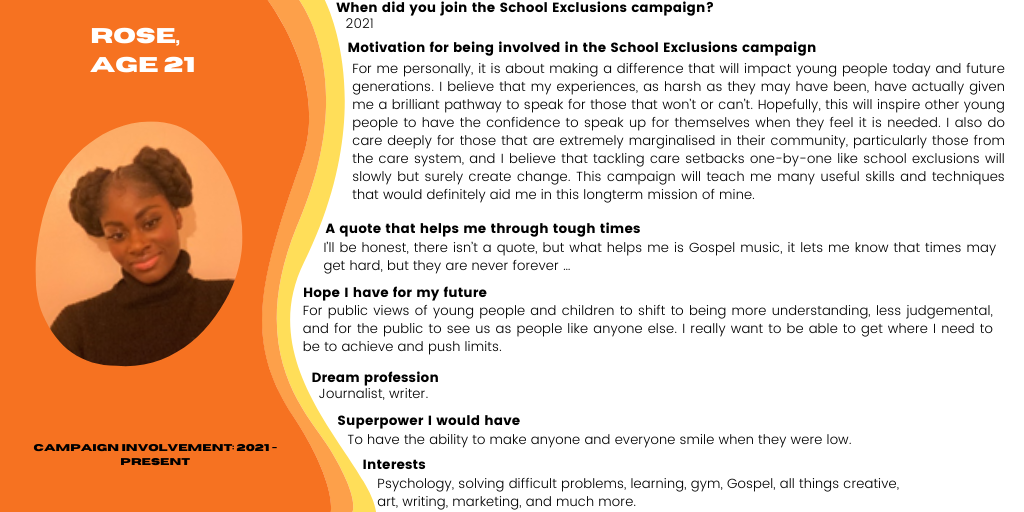 Find out more about Rose's experience, skills, and background in her CV here. 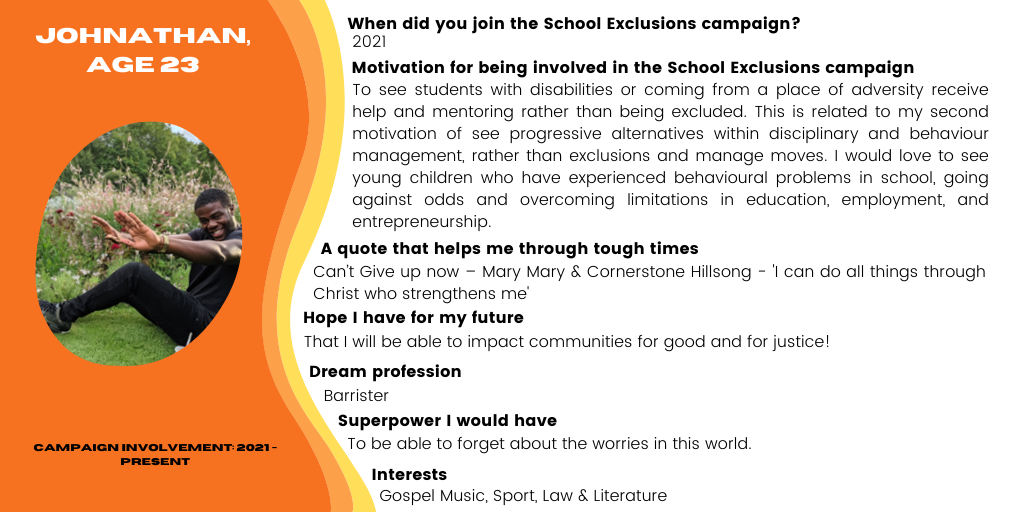 Find out more about Johnathan in this interview in MyLondon News where he talks about his experience with exclusion and the lack of support he faced in school. 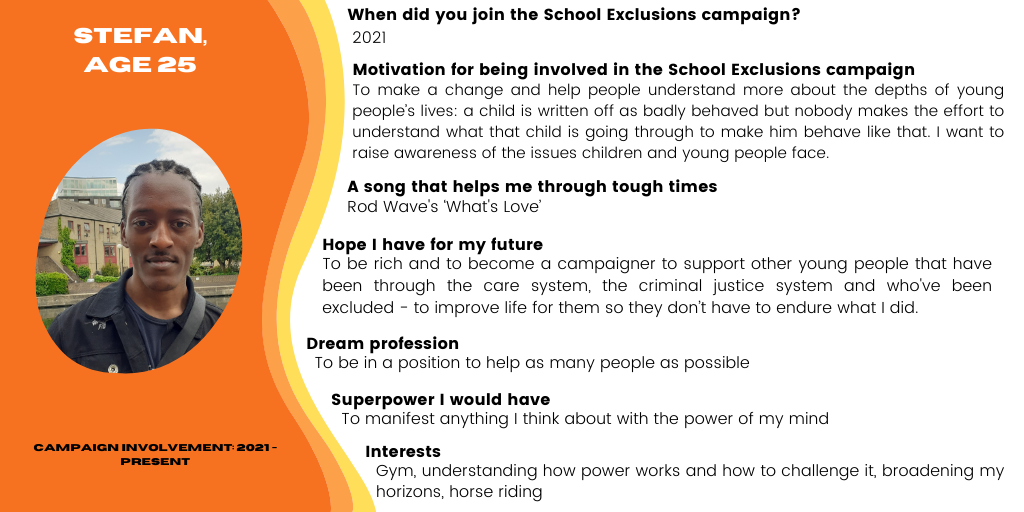 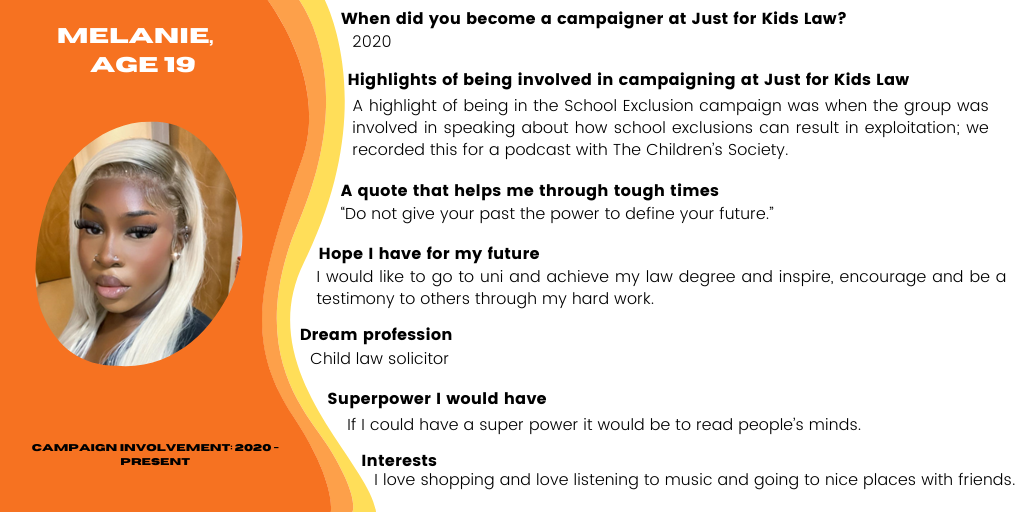 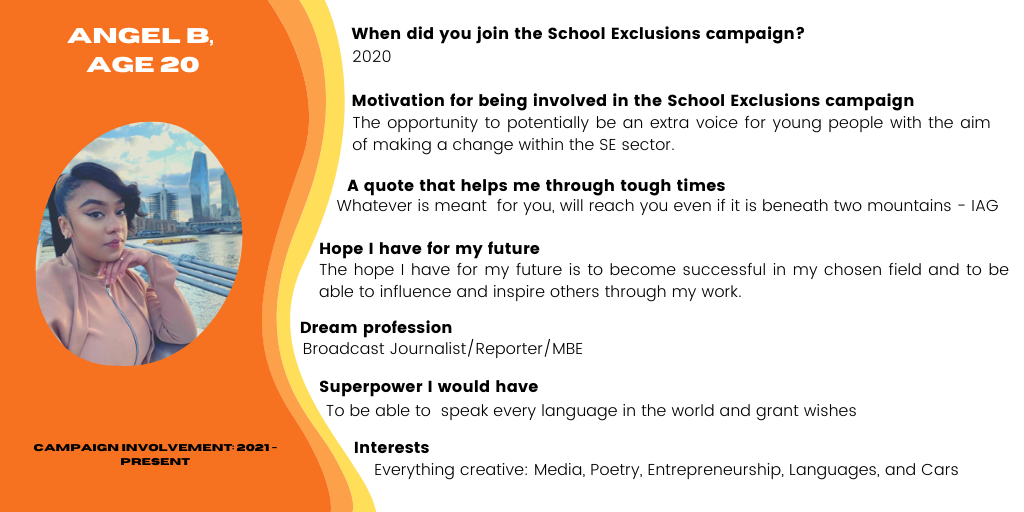 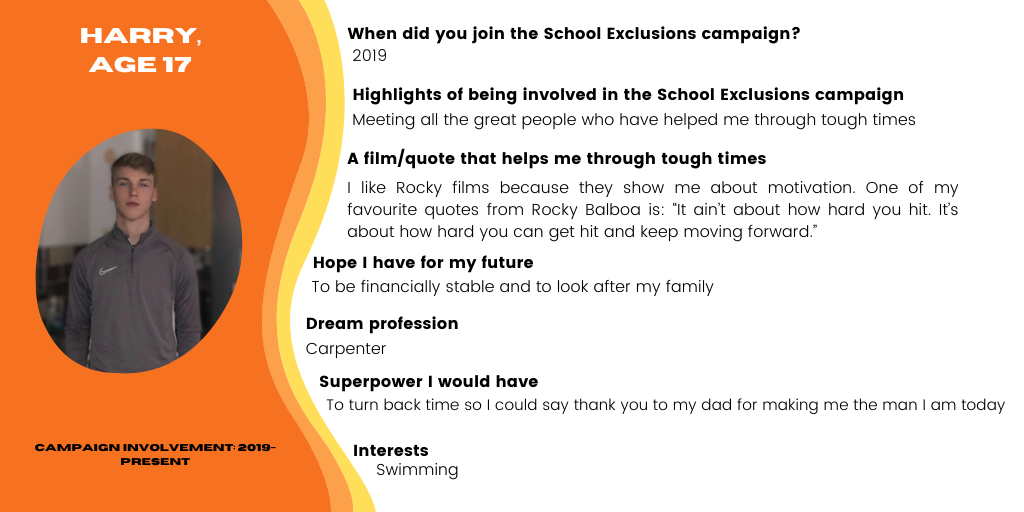 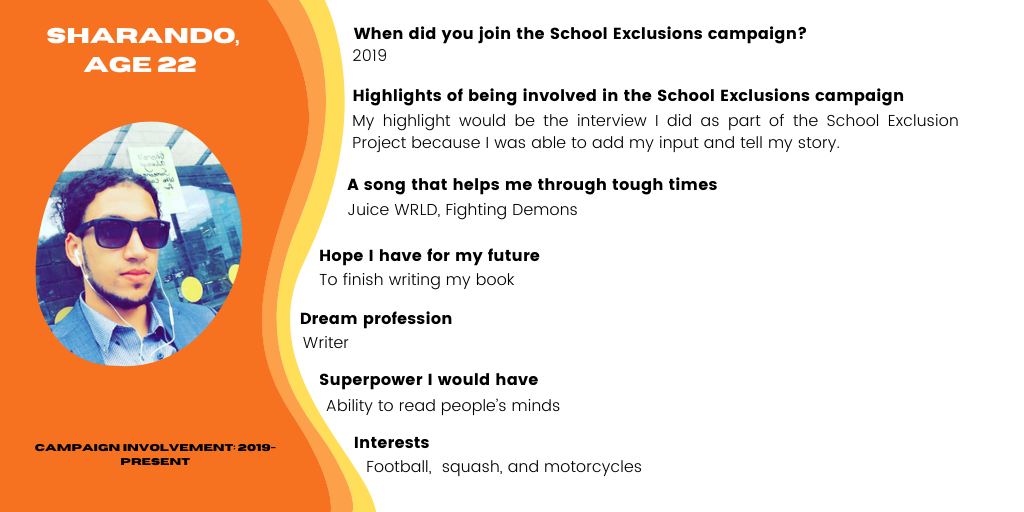 In 2012 the statutory guidance on school exclusions was amended to remove the right of independent panels to reinstate a child in education - even if the panel finds the exclusion to be unlawful, unreasonable or unfair. Since this change, there has been a rise in the number of exclusions, which has been linked to increases in violent crime involving young people. In May 2019, the government published a long-awaited review of school exclusions by the former children's minister Edward Timpson, which found that exclusions disproportionately affect children from Black and Minority Ethnic backgrounds, and those with special educational needs and disabilities.

As well as providing support and representation to children in the exclusion process, we engage with policymakers to push for changes in the law to ensure that schools are held to account and reinstate children in education when an exclusion is found to be unfair. Our campaigning work includes chairing a sub-group of the Challenging School Exclusions Working Party convened by Justice looking at reform to the Independent Review Panel process. We are also working to improve capacity among lawyers and other professionals assisting children and their families with challenges to unfair exclusions through our School Exclusions Hub.

E-mail us to find out more.

Our work on the School Exclusion campaign is supported by the Act for Change Fund: