Ambitious and gifted young people campaign for right to study

Hundreds of young people who have grown up in the UK but fall outside the eligibility criteria for student loans, are calling on universities to create scholarship places to allow them to continue their education.
13 Oct 2016 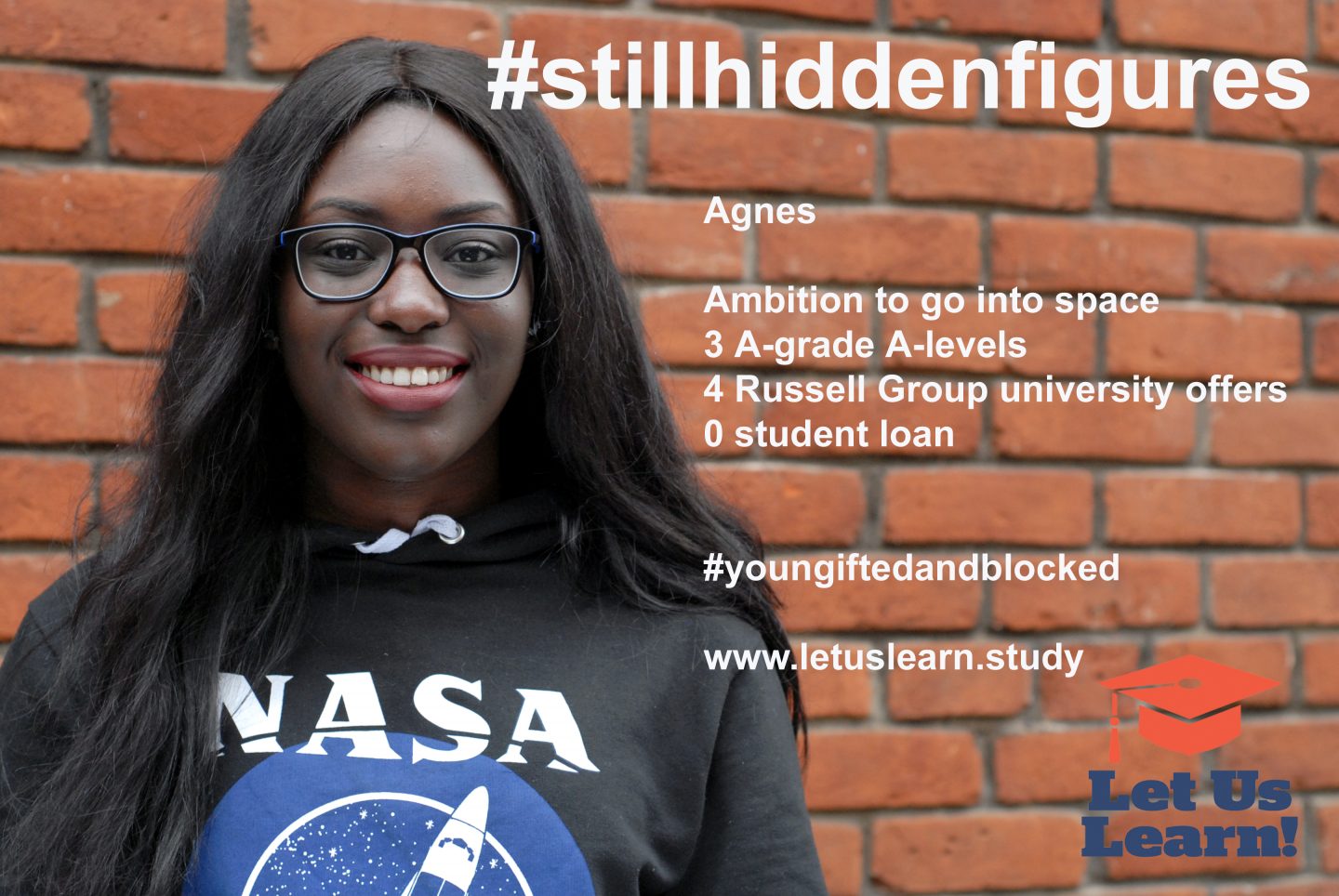 Without financial support from universities, many high-achieving young migrants who have lived in this country most of their lives will be blocked from studying for degrees, and from pursuing professional careers. This is an issue which affects young people across the country, but is particularly acute in London, because of its richly diverse population.

In the latest phase of its ‘Young, Gifted and Blocked’ campaign launched today, over 100 London-based members of Let us Learn (see below) have personally signed a letter which has today been sent to the vice chancellors of the top universities in the capital.

They are calling on universities to create scholarships which would end the educational limbo that is preventing them from continuing their education, because the criteria for receiving a student loan are narrowly drawn.

‘We are writing to ask you to help long-standing migrants like us continue our studies. By doing so, you will also be helping your university ensure it is able to recruit talented and diverse young people, who are often under represented in further education.

‘Many of us come from families where we would be the first members to go to university; all of us believe passionately in the importance of obtaining a degree, and are keen to have the opportunity to pursue our educational and career ambitions.’

Signatories to the letter include would-be doctors, scientists, and lawyers – plus a young woman with ambitions to be the first black British astronaut.

Agnes Harding, 18 who lives in Barking and Dagenham, and achieved straight As in her physics, chemistry and maths A-levels this year, has had offers from four Russell Group universities to study physics. It is her ambition to follow in the footsteps of British astronauts Major Tim Peake and Dr Helen Sharman.

‘I want to study physics because it is my ambition to be an astronaut. I am a very curious person and a bit of an adrenalin junkie. I love knowledge and expanding my understanding of the universe. I would be fascinated to conduct research in space to discover what’s out there.’

Although Agnes has lived in the UK since she was four, she does not qualify for a student loan, and so has not been able to take up any of her university offers. She also faces paying international fees, which can be several times higher than the £9,000 a year maximum charged to home students.

Agnes features in ‘Young, Gifted and Blocked’, a three-minute film produced by Let us Learn, which is also launched today. The film highlights the plight of young people like her, and urges universities to help them by setting up scholarship schemes to enable young migrants to continue learning.

The film also features 20-year old Arkam Babar, who wants to work in the field of climate change research but was left in educational limbo after he found out he didn’t qualify for a student loan.  In the weeks since the film was shot, Arkam has been awarded a scholarship by Kings College London, and is now delighted to have started a geography degree.

‘Before I was awarded the scholarship by Kings College London, I had little hope of being able to study, which was devastating as my family has always placed a strong emphasis on education. I had already previously had to turn down a university place, when I first found out I didn’t qualify for a student loan, which was very hard for me. The Kings scholarship has transformed my situation. I have now started my course and can look forward to pursuing my career ambitions. I only hope that more young people get the chance that I have been given to pursue their educational dreams.’

Let us Learn is calling on universities across the country to follow the lead set by Kings College London, by creating similar funding arrangements.

The Let us Learn campaign was launched in 2014 by the award-winning charity Just for Kids Law.

‘We have now been contacted by over 600 ambitious young people who – having studied hard and done well at school – want nothing more than to be able to take up hard-won university places. They have been to school here and lived in the UK most of their lives. Yet, when it comes to going to university, they are treated as overseas students – they cannot get a student loan, and can be charged international fees by universities, which are often two or three times the £9,000 a year paid by other students. There are very few other funding options available to young people in this situation. Unless universities recognise the problem and set up the kind of schemes that Kings College London is offering, large numbers of young people like them will continue to be denied the opportunity of a university education and blocked from professional careers.

‘We don’t think our country can afford to let so much talent and ambition go to waste. Universities rightly stress their commitment to social inclusion and increasing their recruitment of under-represented groups. The Let us Learn campaigners are taking them at their word, and have written to vice-chancellors, calling on them to prove they are serious about diversity by creating scholarships so that many more young people like them can continue learning.’